New Delhi. India made a great start to their warm-up of the T20 World Cup 2021. On Monday, Virat Kohli and Company defeated England (IND vs ENG) by seven wickets at the ICC Academy Ground in Dubai. The Indian cricket team achieved the target of 189 with one over remaining. After this spectacular victory of the Indian cricket team, former India cricketer Wasim Jaffer praised the team and along with it, former England cricketer Michael Vaughan also had a lot of fun. Jaffer was impressed by KL Rahul and Ishan Kishan, who scored half-centuries. Before leaving the field after being retired hurt, Ishan Kishan played a brilliant innings of 70 runs in 46 balls with the help of seven fours and three sixes.

KL Rahul continued his stellar form in the 2021 Indian Premier League. He scored 51 runs in 24 balls with the help of six fours and three sixes. Mark Wood took his wicket. Wasim Jaffer also praised Jasprit Bumrah, Mohammed Shami and Ravi Ashwin for their performance with the ball. Shami took three wickets, while Bumrah dismissed Jonny Bairstow. Ashwin, on the other hand, did not get a single wicket, but gave only 23 runs in four overs.

Meanwhile, Wasim Jaffer also took a dig at former England captain Michael Vaughan. He was surprised by Vaughan staying away from social media during the India vs England match. Actually, Michael Vaughan often targets and criticizes the Indian cricket team. Jaffer tweeted, “Three things stood in this win – 1. KL and Ishaan with the bat, 2. Boom, Ash and Shami with the ball, 3. Michael Vaughan being offline.

However, even Michael Vaughan did not sit silent on this taunt of Wasim Jaffer. He gave his reply to Jafar in a funny way. He said that the results of the practice matches are quite irrelevant and do not carry much importance. Vaughan replied to Jaffer, tweeting, “Vasim too busy drinking rum on the beach… well let me tell you… warm up games are irrelevant…” 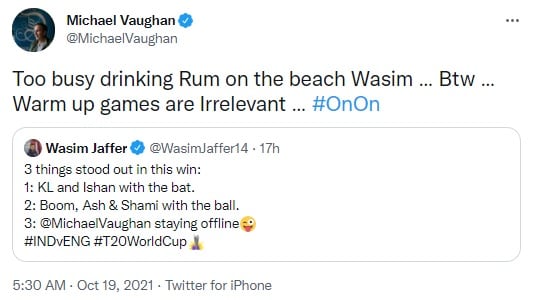 After beating England, India’s next warm-up match is with Australia on Wednesday, 20 October. India now has to face Australia in the same stadium in Dubai. Virat Kohli and his team will start their campaign in the Super 12 stage of the ICC T20 World Cup against Pakistan on 24 October. The high voltage match between India and Pakistan will be played at the Dubai International Stadium. It is worth noting that Pakistan cricket team has never defeated India in T20 World Cup.