New Delhi: Under the ‘Pradhan Mantri Kanya Ashirwad Yojana’, an amount of 2000 will be provided by the Central Government as financial assistance. This claim is being claimed by a YouTube channel. Let us give you more information on this. Actually this claim is fake. It has been confirmed to be fake in PIB FactCheck. Giving this information, PIB FactCheck said that a #youtube channel is claiming that girls will be provided financial assistance of Rs 2000 by the central government under ‘Pradhan Mantri Kanya Ashirwad Yojana’.

Right-pointing triangle claim in PIB FactCheck turns out to be false. No such scheme is being run by the Central Government. PIB FactCheck keeps on making people aware from time to time to protect them from frauds. 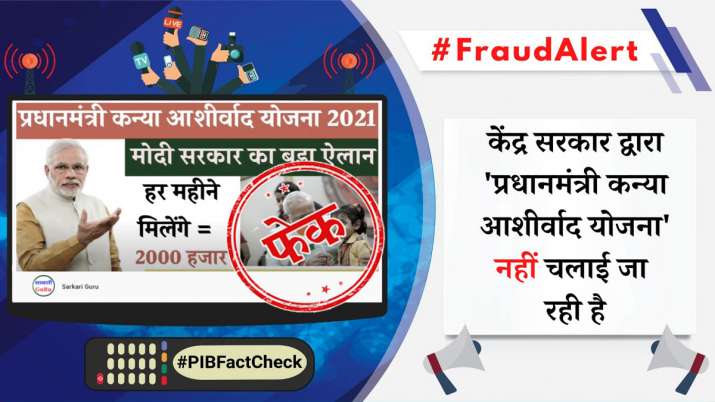 2000 rupees will be available every month, Pradhan Mantri Kanya Aashirwad Yojana 2021, know about this claim

PIB FactCheck keeps on making people aware from time to time to protect them from frauds. Recently, PIB FactCheck, while giving information to the people, said that have you also received emails or messages with similar suspicious links? Protect yourself from fraudsters by never sharing your personal details or financial information on such links. Stay away from fake online gifts/rewards/offers.

Apart from this, a recent viral message on WhatsApp in the name of an alleged official of the Ministry of Home Affairs has claimed that China is sending special types of firecrackers and decorative lights to India to spread asthma and cause eye disease disorders. This claim has also turned out to be fake in PIBFactCheck. The Home Ministry has not given any such information.