Dubai:Indian cricket team captain Virat Kohli acknowledged the need for a “sixth option in bowling” but all-rounder seemed to be hesitant when asked about Hardik Pandya’s bowling fitness.
Kohli said the Baroda player “has to be fit to bowl an over or two” ahead of the crucial match against New Zealand in the T20 World Cup.

Pandya has started bowling during net practice but the captain did not give any assurance that the all-rounder will bowl against New Zealand. However, he did indicate that if the Indian team bowls first in the match, then he himself can try his hand in it.
Kohli said, “It is very important to have the sixth bowling option, whether it is through me or Hardik does it. He should be fit to bowl an over or two. 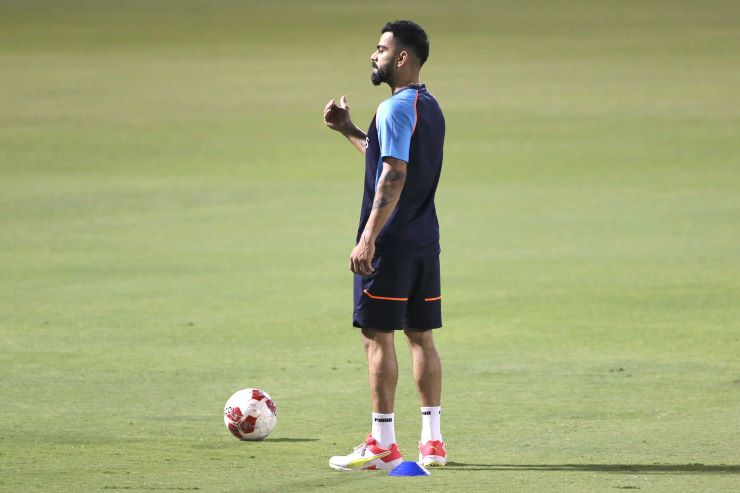 According to Kohli, the circumstances of the match will decide whether the team needs an extra bowler or not. Pandya has not been bowling since his lower back surgery.

“The state of the game decides when you have to use the sixth bowling option. In our last match, if they (Pakistan) had batted first, I could have bowled an over or two. But when we needed wickets in the second innings, we had to bowl to our main bowlers. It’s not like a team with six-seven bowling options doesn’t lose.

Kohli confirmed Pandya’s shoulder injury is ‘recovered’. He also indicated that Shardul Thakur is in the team’s plan but is not a part of the playing XI at the moment, but it may happen in future.
“If you are talking about the injury on his shoulder, Hardik is absolutely fine,” Kohli said. It is noteworthy that all-rounder Hardik Pandya looked uneasy after injuring his shoulder while batting in the match against Pakistan on Sunday. After this, he was taken for a scan by the BCCI, but because he did not field in the match, nothing came out in his report.

He said about Shardul, “He is the kind of player who is in our plan, constantly presenting his claim. He is someone who gives options to the team. What role does he play or where does he fit in, is something I can’t talk about clearly right now. But yes, Shardul is someone who has a lot of potential and he will be of great importance to the team.

Asked how he assesses Bhuvneshwar Kumar’s performance, the skipper said he would not target any particular bowler. “As a bowling group, we have failed to take wickets and we understand That can happen in the game. These are the same people who have worked well for us for a long time. So we know how and where things went wrong.

In the match against Pakistan, left-arm spinner Shaheen Shah Afridi troubled the Indian batsmen and experienced New Zealand pacer Trent Boult has the better ability to get the ball inside.
Kohli, however, did not pay much attention to this matter. He said, “Obviously, he would like to do what Shaheen did. We have to be motivated to counter it and put pressure on him and other bowlers as well. The practice session of the Indian team was canceled on Friday, completed on Saturday

The Indian team’s scheduled practice session, which was canceled on Friday, came to an end on Saturday. Considering three hours, it was better to keep the players in hotels in Dubai.

It is noteworthy that the Indian team has always been provided a ground for practice in Dubai since its gathering in Dubai earlier this month. Most of the ICC Academy Ground was made available during this period, but the ground allotted on Friday was in Abu Dhabi, about 90 minutes from Dubai. According to team sources, the Indian team participated in the full season on Saturday on the eve of the second league match against New Zealand. Team sources said, “The players have been preparing for almost six months and yesterday it was realized that they can do well without traveling to Abu Dhabi. It is noteworthy that the players had yesterday spent the evening playing volleyball on the beach near the team hotel instead of the net session, pictures of which were also posted by the BCCI on its official social media account.

When asked why the Indian team’s practice arrangements were made in Abu Dhabi, International Cricket Council (ICC) officials said that the operational issues are being looked after by both the BCCI and the Emirates Cricket Board (ECB).